John Schneider in Hardflip: A Faith Based Inspirational Film

John Schneider, known by many as “Bo Duke” from “The Dukes of Hazzard,” is co-starring with Randy Wayne and Rosanna Arquette in the faith-based inspirational film “Hardflip.”

“Hardflip” is playing in theaters now. And for all of you who want to see more family friendly, faith-based films, then you are encouraged to get to the theaters and see this movie. “Hardflip” is geared toward teens and young adults, and features some well known skateboarders.

Real life issues are addressed and the movie is meant to have an impact in your personal and family lives. It has been purposely timed to debut for Father’s Day.

WND did an exclusive interview with John Schneider, who is a father of three and a self-proclaimed Christian. He shared why he believes this movie is so appropriate for dads…

“When a script like ‘Hardflip’ comes along, with a real depiction of the rewards of a father-son relationship but also the difficulties of building one, you have my attention.

“In ‘Hardflip,’ you have a relationship where the father and son haven’t seen each other in 18 years, but they find they’re very alike: pigheaded, stubborn, passionate. It’s a wonderful story of how you can’t get away from how similar you and your children are. You’re alike, regardless of the time and distance between you,” Schneider said. (read complete article here)

and he went on to say…

“I just did an interview with another gentleman who was very moved by it,” Schneider told WND. “He’s not even married, no children, but he was nearly in tears when talking about this father-son relationship. I have a feeling the film must have reminded him of his father, grandfather. (read complete article here)

“A financial shift happened with ‘Facing the Giants’ and ‘Fireproof,’ where movies that were faith-based films were profitable. And people in Hollywood – like people in downtown USA – are out to make money,” Schneider explained. “And faith-based, inspirational films are making money because they’re getting better, the scripts are better.

“The only chink in the armor here, however, is that people must go support these films right away,” Schneider stressed. “There’s this mistaken belief that when a film comes along that seems like an answer to prayer about what’s wrong with Hollywood, Christian audiences wait to buy it when it comes out on DVD. But that’s not how it works! In order for there to be more films like the ones we want to see, the movies have to make noise at the box office. (read complete article here)

Hardflip follows the story of Caleb a young skater whose ill mother and absent father leave him reaching for the only hope he has—becoming a sponsored skater. After finding a stack of old love letters, he sets out to find the father he never knew and inadvertently begins a journey he never could have expected. This story explores what happens when we let go of our anger and pain and forgive those who have hurt us most. 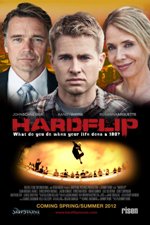 Find out more about the movie, a theater showing it near you, etc at the “HARDFLIP” website: http://www.hardflipmovie.com.

Do you plan to see, want to see, or have you gone to see “Hardflip” already?